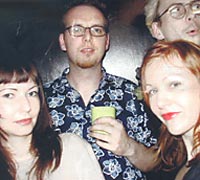 Hoover Pitmann - big interesting guitar from Ben and lead singer Geordie and serious rythmn from Susanne on bass and James on drums. There's also an accoustic version of the band which adds one member and has Susanne playing cello. They recently played at Brockwell Park as part of the spliffy day march/festivities. We went along to rehearsal in South London recently to talk to them and followed up with email. www.hooverpitmann.com

Better tell the story of how you came up with the name ...

Would you say Hoover Pitmann has a message? Do you consider you're about something?

No. It's for the audience to make their own mind up.

On your demo CD I liked the juxtaposition of 'An Evening with Hoover Pitmann' which conjurs up a picture of a polite (and probably not very loud) middle class gathering, with the title 'Slumscape'. What you write about is fairly universal though - what does Slumscape say?

We live in the depths of South London,its what we see when we look out of the window every morning. I quite like the contrasts we present, as the lyrical content is fairly every day life stuff but often against a dark musical backdrop.

How long have you played together now?

As Hoover Pitmann we've been together 3 years. Previously James, Susanne, and Geordie were together 5 years with MaxTractor, and Ben and James have been playing together since birth,in various musical guises

We talked about conscious influences and came up with Fugazi, Bob Mould, Pixies, Siouxshe, Elvis Costello - like to add some more? (Go for it!)

Had any strange and interesting gigs yet? (Las Vagueness -was that it?- sounds like it might qualify)

Glastonbury Travellers stage 2 years ago- A van that kept breaking down,lead singer with a fractured ankle,the promoter didn't realise we were coming and we missed our midnite slot and were bumped to 4am surrounded by ketamine munching, mouth foaming crusties and thumping techno. The sun wasn't even up so we couldn't feel our hands and there were 2 punks in the front row shouting "do you know any Ruts?!"

What's been your favourite so far?

N.F.A Caberet at the Hatcham Social Club earlier in the month. It was on for young and old ! People were bouncing off the walls and kids were dancing on tables. The audience provided a great atmosphere which we fed off. Could have done without the smoke machine though

Do you leave improvisation space live generally or are there various songs which have space for that?

Theres always room for our innovative guitarist to try something new, much to the surprise of the rest of us!

When I saw you live at Brockwell Park I thought there were some harmonies and changes that were more out there than on your CD. Too much spliffy smoke, or is that a development in the material?

Could be new material and development,our c.d is over 2 years old now (and you were WASTED)

OK, the next twelve months - what would you like to happen (individually).

Geordie- front cover of Vogue, worldwide tours, marriage, a fancy car, and a team of stylists at my beck and call

Ben- Id like to get fit and get more sleep, and get my red telecaster chromed

James- some Bristols of my own