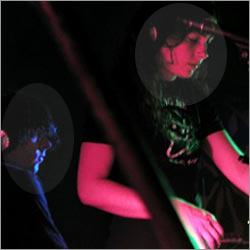 Deprogram is Mary Budimir and Nick Mainsbridge. They are based in Sydney, Australia and play electro with live improv and video. Nick Mainsbridge is well-known in Australia for his association with The Triffids.

On the technical side they are one of the first professional bands we know of who use Linux to get things that matter done.

We talk to Mary and Nick by email about their music, Linux, and Australia.

First up, how did Deprogram get under way?

M: Deprogram started out as a solo venture in '97. It was my first serious attempt at composition based on experiments around sampling. Nick joined the project while producing 'Infiltrate Systems,' taking on live mixing and keyboards for our European trip in 2001.

N: Mary needed help finishing her album. We quickly found out that we were interested in trying out similar things, so we continued.

On your website, your music is described (to paraphrase a little) as big beats with dirty atmospherics. The tracks I've heard also have a commercial sensitivity which might win you friends outside the usual group that go for the electro stuff. Your voice would be a factor there too I think. What is your audience like?

N: I think the description on the site was once accurate. When we recorded the last album, we found some nice techniques for making music. It was our challenge to make some palatable tunes with them.. maybe something that would be played on the radio. I think we were very wary of sounding like a 'dance duo' or something silly like that, yet we obviously had to end up with something acceptable. The album we're currently recording feels more confident. We're more comfortable about our oddness. I think our audience comes in all shapes and sizes. We're not really adhering to anyone's idea of a genre and we're not a fashion cult, so there is no particular age group that like us.

M: We've even played at Australia's country music capital, Tamworth. Most of our gigs are still linked in with underground electronic events like Electrofringe and HOWLfest, drawing an alternative crowd of uni students, activists, like-minded artists and dance/electronic music fans. Though we like to think we appeal to a wider group as the electro audience is so small in Australia.

Sometimes people who electronically alter their voices a lot don't like their own voices at all! Is that you, or is it more to do with making the textures flow together more?

N: It's embarassing to say it now, but we were after this classic kind of "music in the future" feeling for most of the 'Exit' record. To us at the time, the words themselves really suited that kind of treatment. Who really knows if the fear of a naked voice caused us to go down that path. Nowadays, i think we both realise that there are more sounds available from the voice itself than there are ways that you can treat it electronically. I still like what we did, though :)

M: I didn't like my voice at first, but I've grown more used to it through live work. When recording, messing with effects often leads me to some unexpected places. I'm not one of those vocal purists, I'm just trying to get a good sound out of what I have.

In the stuff that you do, do you have any present or past inspirational figures?

Do you have regular gigs in Sydney? Where do you play mostly?

M: We play 1 or 2 gigs a month here. We hang around the inner city, playing at warehouse parties, clubs and pubs like the Hopetoun and Annandale Hotels. Our favourite type of gig is at outdoor festivals just out of town like Regrowth and Elixir. We sound better in open spaces than pubs with hard surfaces.

Do you get down to Melbourne much? What sort of places do you play there? Sydney and Melbourne have a well-known rivalry about just about everything including their art and music scenes but I thought that in this area of music anyway, that people tended to pull together more and see themselves as one group ... that is frequently not in agreement with the government of the day and the general level of conservatism and anti-intellectualism that seem to rule. Is that too much of a generalisation?

M: We try to go to Melbourne at least once a year, but would love to tour there more. We've found Melbourne audiences to be more into our style of performance, but then maybe they show it more than Sydney people. The underground and community-based music scene looks really strong and vibrant compared to here.

N: Melbourne seems much more music friendly to us Sydneysiders. There are more places to play, and for some reason the acoustics tend to be better. I think musicians everywhere are supportive of each other. Good musicians know how to listen, so conflict is usually limited to bruised egos. I think we all realise how hard it is to survive as a musician, so we tend to be quite tolerant of each other.

Anti intellectual government? Hmm. Certainly our government seems mean spirited and intentionally ill informed to some, but that doesn't make them anti-intellectual so much as anti-reason. I don't think you'll find many Australian musicians that are supportive of or supported by the current federal government.

Would you describe the scene you play in as generally healthy? Are there other people/groups you'd like to mention?

N: There are very few places to play music in Australia, mostly due to the sheer number of poker machines in pubs & clubs. Although musicians sell more beer on the night, we can't compete with a machine that generates $1000 per square metre in the same time. We have more poker machines here per capita than anywhere in the world.

M: The venue owners are rarely on our side, so we've been teaming up with other electronic musicians, pooling resources so that we can host gigs in places like warehouses and art galleries, where alcohol sales aren't the main priority. We're involved in Clan Analogue, an electronic music collective based mainly in Sydney and Melbourne. It's a grass roots effort that's been going for over a decade, made up of electronic artists organising events, releasing records and promoting work by new artists. Groups like this are essential in keeping live electronic music alive in Australia.

Deprogram has interesting members. You, I think, have run courses for women in using Linux music applications and it's reported that Nick Mainsbridge, who is quite well known from the Triffids, has been part of the development process of ardour in submitting bug reports and the like. How did you both come to be using Linux?

N: I more or less told Mary she had to change. What she had wasn't working well, and of course there is no way you can diagnose beyond a certain level with proprietary stuff. Given that I was the support guy, I won. Mary has coped remarkably well with the change. I think she had some preparation with Cygwin for a while, but that was it. The rest was cold turkey. Poor thing. I was originally drawn to Linux because i was looking for different ways to manipulate sound. I had owned a Fairlight for long enough to become hooked on their sometimes bizarre approach (e.g. sample at a low rate and add the missing harmonics with analogue oscillators). Programs like SMS and Csound were very appealing to me, and it seemed that the most interesting work was being done in the world of GNU. For a while i ran a Linux machine just for sound mangling. When i realised where Jack and Ardour were headed I was convinced that this was the way forward.. especially given the license.

Before computers hit studios in a big way, leaving the maintenance of any piece of equipment to the manufacturer was unheard of. Not having the circuit diagram of your main recording machine was unthinkable. GPL'd software is probably the only choice for someone who comes from that environment. I contribute to Ardour simply because i do maintenance on my studio.

M: I used commercial software for as long as I can remember. About 2 years ago, my problems in Windows were getting too much. Even though Linux audio was still a bit rough around the edges (still is, but at least it's fixable), Nick installed it on my machine. Really, he was sick of hearing me complain all the time. It hasn't always been a smooth adjustment - I think the complaints got worse. Nowadays everything is fine (touch wood). Using things like Freqtweak and Freewheelin make me realise that this is where the new approaches are. The main program I use now is Ardour. I'm not really interested in this prefab music stuff you see everywhere. The sounds tend to be boring, and generally I don't want other people's sounds anyway.

Do you exclusively use these apps right through the process, or do you dip into and out of the more usual things like Pro Tools?

N: We don't have the need for Pro Tools since Ardour has become so stable. We've had many frustrating experiences during it's development, but those days seem to have passed. Given some of the stories I've heard from our studio tech, I don't believe we've had a worse experience than your average PT customer. We're very much about recording things here. Our setup is pretty much a normal studio control room, only we run Linux instead of OSX/ProTools.

In your courses, I think you were teaching empowerment as well as technical detail. How did that all go?

M: The point of the last workshop was to give women hands-on experience using open source audio tools. Some were beginners in audio, others performance artists or DJs interested in making electronic music. Everyone took to the software and we had a fun afternoon messing with sounds.

The workshop was sponsored by Sheliafest and a group of female musicians and techies called EADA (Electronic Analogue & Digital Artists). We do workshops for each other and help out with gig opportunities. We hope it'll get more women involved in music technology.

What computer applications generally do you use on stage and in the studio?

M: On stage we use Mixxx and Ardour, controlled by MIDI, and soon by a USB sensor. In the studio we mainly use Ardour. Sounds and loops are generated in Hydrogen, Freqtweak, Terminator-X and soft synths like ZynAddSubFX. The LADSPA plugins are probably used the most, along with Jammin for CD mastering.

Do you jam a lot on stage or are most of the pieces pretty well set out beforehand?

M: We jam with effects, keyboards, drum triggers, mixing and mics. We improvise around certain arrangements that are blended DJ-style in Mixxx. Now we're looking to tools like Fweelin, which offers more scope to come up with ideas on the fly.

There is a great quote from an early Sydney settler that referred to his fellow writers as writing so much about the great outback and visiting it so little. This might be true of modern Australians as well. Do you think there's any big sky, or wide-open space in your music, or something that's particularly Australian?

N: For many Australians, the settler has a strong case. As Australian musicians, however, its a completely different story.. you see we drive everywhere :) Personally, i think it is difficult to grow up in this country without being touched in some way by the landscape. To me, deprogram sounds a bit like driving between cities.

(Tip of the cap to Erik de Castro Lopo)