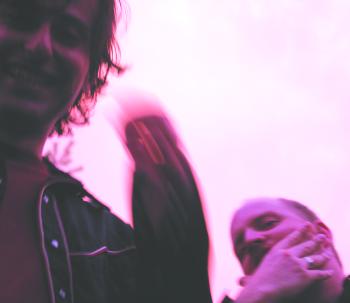 If you ask a budding commercial band member what they want, the inevitable answers will start with money, sexual partners, and might mumblingly include "respect". Ask an indy band member the same question and the first answer will usually have to do with "just getting to do it", love of doing it etc. While it's true that images are more blurred at the border, Rick Lescault and Emetrex are certainly true to that scene even if they don't want to wear the shirt.

Emetrex have a new LP CD out on April 4, 05. They are signed to Seriously Groovy.

How did you get started in music?

I can't remember not being into music - you know, listening to records and being into bands. as far as playing goes, i started pretty late - 17 or 18. my girlfriend bought me an acoustic guitar for my birthday and i was off. she later broke up with me because she didn't want to go out with someone who was in a band. it would be a recurring pattern in my life.

Do you use any interesting electronics in your band?

well, we think they're interesting or else we wouldn't use them. to tell the truth, i've never been much of a 'gear guy'. i'm not up on what the hippest vintage synth is or the fact that this pedal with the green label is the best. that stuff really doesn't interest me so i guess i'm not much of a collector. i'm interested in what sounds good - sometimes that's a Wendy Carlos designed keyboard, sometimes it's a Casio; sometimes banging on an empty file cabinet is the sound that works.

How about the guitar side of things? Any weird gear?

nothing especially weird, i don't think. i play an old pedal steel and i have a lap steel that a friend is letting me use. other than that it's all pretty basic. i've been trying to keep it simpler lately - getting rid of gimmicky effects and things i don't need. i've finally settled on a couple of guitars i really love and i've been thinking about tone a lot more.

not really. once you've been playing for a little while and get to actually meet a few of these people you see that they're just trying to get by like everyone else. i used to regard someone as special because they wrote a certain song or were good at guitar or whatever - i don't anymore. there are people i greatly respect, but hero worship is a bit much.

"... smouldering, deranged stoner noise-fest" are words used on the Seriously Groovy website to describe your last album and the general impression is of slightly loopy post punk-ness and yet the latest songs I've heard are more structured than all that would suggest. What do you think?

it's still always been about 'the song' for us. i don't think there's anything as beautiful as a well-crafted song, whatever the genre may be. a lot of indie music flounders sometimes because bands get all wrapped up in attitude and the presentation of the whole thing before really having songs to begin with. i think it's the most important part of what we do.

Does your band live for the show or is the creative side the main spur?

i don't see much difference really. we try to treat shows sort of like rehearsals and make them a place where we can go off a bit if we feel like it. i've never liked the idea of a show being this thing where we try to parrot the record. it's like the old jazz combos - people get a chance to see the band create something live as well has hear the songs they like. and sometimes that doesn't necessarily mean jamming - sometimes it's playing a song differently because the mood or situation calls for it.

You're at the Rhode Island School of Design, I think. Do the graphics and other ideas you come across there leak out into your music in any way?

sometimes. it seems i've always played with guys and been around people who were visual artists as well so i don't think i'm especially conscious of it. plus, people at our label have that background as well so it's something that just seems natural.

Has Boston got a special sort of scene that supports more indy type bands? Are students the main supporters of such a scene (if it exists!)?

I'd love to say yes, but unfortunately there isn't. for some reason Boston has always had this reputation as a real happening place but i've never seen it. in fact, there are fewer venues now than ever and the ones that are still hanging on are hurting. i'm not sure where the students go in Boston or Providence but it doesn't seem to be to see live music. New York is gigantic so there's always something going on and there are pockets here and there but people don't go out to see bands in the states like they do in the UK, for example. maybe it's just a cyclical thing - i don't know. the indie thing is tiring for me right now anyway. i mean, we are indie - by definition - because we choose to do a good deal of this ourselves, but you get sick of having limits placed on what you want to do because something isn't 'indie' enough. all fashion statements have a shelf-life and indie rock - as a style - is no different.

Is there a single venue that stands out right now as being the place to go?

This interview will go up at the end of Feb so if you've got some gigs you'd like to promote in March, April, May, or whatever, we could put them here.

we'll actually be coming over to London to play at our label's 10th anniversary night. it'll be at the ICA on March 18th. we're still all working through the logistics of it all right now so i'm not sure exactly who else will be there yet. we'll most likely be doing other shows earlier that week that haven't been confirmed. (ed's note: The show was pulled by the ICA at pretty much the last moment which makes us wonder quite a lot about that group of people. There will be something coming up though which will hopefully be announced by Seriously Groovy.)

Thanks a lot Rick.