interview: Hush the Many

Hush the Many are Alex, Jo, Nima and Ruban. Greg played drums for the duration of the Arts Council sponsored tour which we visited the second to last night of at The Spitz in London. Labels might frequently be either misleading or simplistic but to give you an idea, the phrases "psychedelic folk" and "anti-rock" were used by Ruban.

In this interview we talk mostly to Nima and Jo. In the podcast we talk to Alex and Ruban and catch a song from their set. Podcast - audio ~13Meg

First of all, the band name -- What is the meaning of Hush the Many?

Nima: Well actually the whole name is Hush the Many (Heed the Few). It's to do with voices of reason, whether in our own heads or out there (points to the wider world)... All too often, and especially in turbulent times, it's the voices of reason that don't 'shout as loud' as the others, and become the quiet unheard...so I guess maybe our band name is like a tribute...to the quietly wonderful. Does that make any sense? If it does please write in and let me know

That's quite a nice story about how the cello player joined and how the drummer became part of the tour lineup, which people can catch in the podcast. How did the four original band members get together?

Nima: Ruban and I had worked together musically for a long while. When I met Alex I had a solo thing booked, but after an evening of music-making round mine we just thought we'd take to that stage together. Ruban turned up on the day and just played along in his very own unique ways. Me and him had always had something special going on musically, so it was easy to jump straight back into playing. A few months later the band sound was completed when Jo brought her cello to it, and since then we've been working as a quartet, sometimes just as we are, and sometimes with different members of a wider collective of very talented musicians and friends we feel very privileged to work with...such as Greg, the drummer you saw at the Spitz.

What sort of vision did you have of what you might do?

Nima: Well, there wasn't a pre-set agenda. Musically it was important that nothing was pretend, or forced, and that everything felt honest and right at its core.

At the same time that's got to balance with pushing at the boundaries of what you know, and taking things further than where people before have left off...On a personal note that's very important to me. I like to be challenged by music, and for it to be like when music's so good it makes your toes curl up.

And tones are important in that too. I think it feels to all of us that you could strip everything away our songs to any one component part, whether a voice or hand-held instrument, and it would stand up on its own. That's quite exciting. And it allows us a very special palette in terms of what we're able to do, and much broader tonal and dynamic potential. 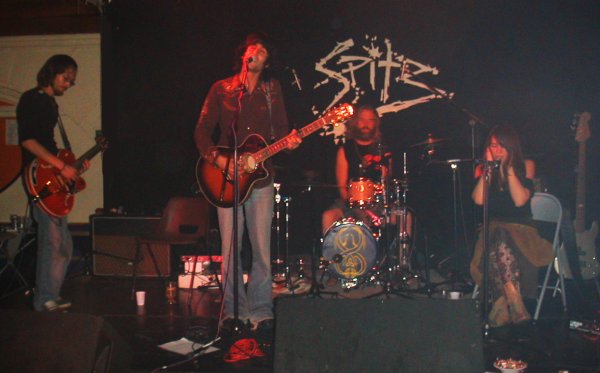 Ruban, Nima, Greg, Alex, Jo is out of picture on the right

I think a couple of us share a love of making certain things happen in ways that you wouldn't usually expect, so that the next thing to happen isn't actually predictable, but when it happens it sounds right. There's a balance in that somewhere too.

Nima: There's been a lot of bands that have inspired me over time - honestly too much to mention here! I've seen Spiritualised do some stuff which has really stood out there, heard some beautiful Sigur Ross recently, been turned over round and round by the lyrics and delivery of those such as Leonard Cohen (of course), mister Bowie, and the poet Drake, and I enjoy it when a band really knows how to rock well.

Jo: I listen to all sorts of stuff and am often inspired to create in terms of sound rather than style. The music of HTM is full of space and that's one of the things that I like the most, and find the most powerful in music, the creation of space and time. How arsey does that sound? Whoops.

Ruban has some interestingly spacey things happening with his guitar. What sort of effects does he use?

Ruban: I'm a big sucker for crazy sounds so any pedal or basically anything that lends itself towards this end is welcome in my setup.

The electric cello is a fabulous instrument both in the way it sounds and the way it looks on stage. Did you, as a group, mull over how the instrument could be added or did it just happen?

Jo: Thank you! Can't answer what the group thought, but from my point of view I was desperate to get up and play from the very first moment I saw them in Nottingham, and that's never changed! The cello seems to sit well in the mix in terms of pitch range, sometimes acting as a 'backing vocal' and sometimes as a soloistic instrument. Very versatile. The look is pretty I agree, but it's more in terms of practicality. I often play with my English 19th Cent acoustic cello in rehearsal but there are sometimes problems miking the instrument and cutting through in the mix / monitors. Also with the electric cello I can use effects (sparingly!) if I wish to.

I liked your use of dynamics. There is a temptation, I think, to have the amps on 11 all the time, especially when you don't know the audience. Do you have a game plan if you're being overwhelmed in the quiet bits?

Jo: The funniest thing is that it's often easiest to get the audience's attention in the quiet bits. Most of our audiences have been great and totally respected the space we need to create some of our quieter moments. On the other hand, if it's a fun, noisy and happy crowd then we might decide to dispense with the tremendously delicate numbers and 'have it' more on songs like 'Song Of A Page' for example.

Alex: It's been a lovely thing to witness, or, at least from my point of view, to hear the silencing of an audience when everything gets stripped right down and you sometimes have to really focus to hear anything -and people actually do! which is a really great thing - i feel honoured at the thought of people really wanting to hear our music...

Your recent tour was financed by an UK Arts Council grant. How and where do budding musicians find such things?

Nima: To be honest, I think it's amazing that we have a thing such as the Arts Council in this country, ready to fund things they believe in. My advice to anyone would be to just get a clear idea of what you're planning to do, what's the right next step for you, and just to get on with it but then at an early stage to call your local Arts Council office and talk over your ideas with them. They'll be incredibly supportive, as they were with us, and if they can help you they probably will. It has to be remembered that different bodies have different criteria for funding, and it might be that you don't fit certain people's bills, but there's nothing to lose by asking.

In the podcast, Ruban mentioned that he hoped some recording would be coming up next. What is the general plan?

Nima: Well the general plan goes something like this: We have an EP coming out in November, which we're happy with, but we've just done this tour, and musically come a long way since recording that one all those many months back. So we're only going to a few more gigs before Christmas (I imagine), and instead we're going to go with the natural seasons a bit, hibernate a bit, record for a while...and take it from there... How does that sound?

Thanks a lot everyone.