Juana Molina is from Argentina, though she lived in Paris for a time while her country was ruled by a dictatorship, and she has also lived in Los Angeles. After being a famous TV comedian in her own country, she returned to her first love, music. She is a singer songwriter who plays guitar and uses electronic sounds for added texture.

M station: One of the things I was wondering about is that with the Joabim-like soft, melodic tunes, for a lot of people outside South America, this is chilled out music for soft kissing. Does it represent something else for, say, Argentinians? 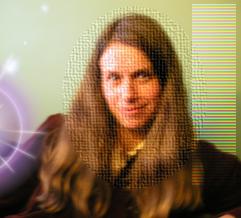 What do you say when you write?

I don't think about it. I just do it. For example I really like James Brown but I cannot be him or sound like him but maybe things come out in subtle ways.

So he's responsible for the loud moments?

What is your history in music?

I was quite a famous actress in Argentina and was doing that for eight years. All the time I had wanted to do music but being an actress was a way to support myself. When the press came to my first concert, they hated it and wrote unfriendly things. They wanted me to be an actress only. I had then no following and I slowly built it up. I have two albums out now.

I suppose the money from acting helped you through.

No, I live in the country. The climate is a little like Barcelona but gets very cold in winter.

Would you like to describe the general flow of your work?

Come to my show! There are different things ... stories

What have you got coming up?

There's a new album out next year and I'm planning to make the show more closely fitting with the new material as, in the past, the album releases have not coincided very well with what I've been doing at the time.