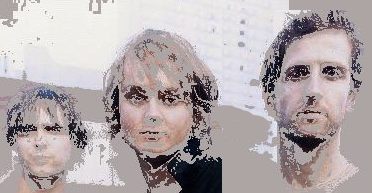 Mstation first came across Keane before they were even signed. The medium was their demo CD. At the time we thought it was good stuff, hoeing its own road in some respects while being accessible enough that people might actually buy-in.

And buy-in they have. Lately, Keane won two Brit awards for best British Album (for Hopes and Fears) and best British Breakthrough Act and have been touring extensively, before and since.

the official Keane website
a Keane FAQ run by fans

Here we talk by email to Tim Rice-Oxley who plays piano and keyboards. The other members are Tom Chapman (vocals) and Richard Hughes (drums). Their first album was Hopes and Fears. The second is on its way.

Mstation: Comparisons are odious I know but people have mentioned Coldplay and Radiohead to describe Keane, and I hear a little Tori Amos. If you're describing Keane to someone who is musically literate but hasn't heard the band, what do you say?

Tim: I would say to expect something very melodic and very english. I think our nearest touchstones are the smiths, then people like the pet shop boys and u2, and earlier writers like paul simon and david bowie, and even the great american songwriters like irving berlin. We're also influenced by a lot of more electronic stuff like depeche mode and the chemical brothers. I would also tell people to expect unashamedly honest and personal lyrics.

I think you mentioned early Queen as one of your likes. Who else do you like from back then? Now?

See above. Now, one of our favourites is rufus wainwright - he came on tour with us which was really fantastic. Brendan benson is another favourite. I've recently started reaching back to the beatles, who I've neglected for several years. I was listening to some studio tapes of theirs a few days ago and it shows you how unbelievably inventive they were. The basic songs and creative ideas were so brilliant. All the over-hyped fashion bands embraced by the media at the moment are pathetic by comparison.

There have been false media reports of Keane slagging off various people. Is there someone you'd really like to slag off? The media?!

Bands generate publicity for themselves by mouthing off when they can't get people's attention with their music. We are the opposite. The only other artists we care about are the ones who inspire and excite us.

Someone from the band made a comment that you wanted to be big -- to take your music to a large group of people. Your style of music isn't exactly a corporate ideal for what might be big this week or next week, so I'm wondering what sort of decisions you made. Were they to do with accessability of the music and the like? Or was it "well, here's our music as it is, and as we like it, and we'll do our best to promote it"?

It was a case of believing that music can change the world. In the early days of rock and roll people wanted to be heard, wanted their songs to fill the airwaves far and wide. that's what we want. When someone in israel writes in saying how they fell in love driving through a war zone listening to our songs, finding hope despite people they loved being killed, you're reminded why you try to get your music heard everywhere. The current reverse snobbery about those grand ideas is cowardly bullshit.

Congratulations on the awards you got for your first album. I'm told the second one isn't very far away. Do you want to give us any clues about what's coming up?

The second one is probably a good year away, but we're just starting to work on it. So we don't know quite what it will sound like, but I would predict more rawness and atmosphere, and hopefully a few more danceable songs. The fundamental purpose of the second album for us is to do something different, rather than feeling restricted by a fear of failure.

Your songs mostly involve universal kinds of themes. Is that a conscious following of the Keats Ode to a Grecian Urn school of thought (not the unheard melodies are sweeter bit!) ... are you aiming for timelessness?

We're not aiming for timelessness, but I will say that a great song can live on for years and years, wheareas a haircut or a controversial quip is forgotten very quickly.

I think you used to use a studio at Tim's place to put your ideas together. Do you still do that? Do you think that the pretty countryside around there adds a small voice to what you do?

Contrary to most people's perception, we're not purely a countryside band. We lived, worked and created in london for many years. But small town life is definitely a big part of who we are as people. And you only have to listen to the smiths to know that the dramas of a life lived in a small town can be every bit as inspiring as those that spring from the city.

Neil Young once said there was a song in every guitar. I wonder if you feel the same way about pianos and synths.

Hmmm. I certainly find that sitting down and writing at someone else's piano, or a piano in a strange place, often feels different and that can make it easier to write a song.

You're doing a lot of touring at the moment. Do you have any tricks to preserve your sanity or is it just a case of going with the flow?

Writing preserves my sanity and writing a good song makes me very happy. When touring prevents me from writing I get very depressed.

KEANE are on tour in the US in May and June before returning to the UK for the Wireless Festival in London's Hyde Park on 29th June. Check their website for more details (link at top).