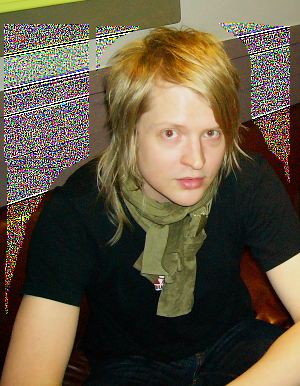 Husky Rescue's Marko Nyberg is sitting outside enjoying London's spring when Mstation went to meet him in Bloomsbury. Compared to Helsinki in Finland, it is quite warm and bright here.

Marko is Husky Rescue and is in London to talk about his new album, Country Falls, and pretty much anything else that floats by including time spent living and staying in different parts of the world. He's an engaging, friendly guy so talk comes easily.

We start off with recent history and Marko and five others recently played at the Austin, Texas festival where Marko liked the music fan's night where the audience was very enthusiastic and mentioned the biz night which had lots of guys sitting in judgement with their arms folded although Marko comments that the mood was still receptive and open minded.

What's the live lineup of the band?

I play bass. There's a singer who plays a Rhodes, a guitarist who also plays lapsteel, a drummer, a keyboards player who also plays accoustic guitar and backup tracks from computer to add extra texture.

Next it's the background to his music and Marko says he had to work hard for years before he started.

'This was for my sanity. It started as a studio project and it grew as I wanted it to sound. There were no thoughts of trendiness or trying to catch the biggest wave.

In producing your work, do you use standard multitrack practise or have you evolved some special ways of working or tools?

I started to produce music with a sampler in the mid 90«s. I still use/ sample stuff with my old favorite Ensoniq ASR-10 because it sounds great, but I«m pretty stuck using ProTools. It has become my sampler (I«m using that pretty much same way) with powerful multitrack possibilities without worries about the lack of memory. I re-record tracks through plugins and analog equipment. I couldn«t just use a completely digital environment. I have to feel the real knobs. It would be quicker to use just plugins, but there has to be time for real analog sound and a pleasant cup of tea in the studio.

What sort of gear did you use for Country Falls?

Good quality recording channels. (Basically Manley and Amek.) A combination of good condenser and ribbon mics and really "crappy" sounding dynamic microphones. Studer PR-99 Reel-to-reel, A variety of different tape echoes and spring reverbs. And of course a wide range of guitar pedals, I am a proud owner of some old school russian ones. Every time I plug into those I feel a bit scared - they have to contain some radiation - but I«ve ended up getting beautiful character sounds out from those noisy boxes.

I thought the cover art for Country Falls done by Kustaa Saksi showed a really nice understanding of what was inside. Did you brief him specifically or did he listen to some tracks and then go for it?

Kustaa has a really great understanding of aesthetics, a great sense of style. He was constantly listening to the music even before it was finished, so he got in to the right mood. Artwork has been the essential part of Husky world. We both have loved Moomins when we were kids. Actually we love them even more nowadays.

Then we ask about Finnish music and people we should have hear of.

Imatran Voima who do electro. 22-Pistepickko, who do a blues yet not blues rockish sort of thing. Pepe Deluxe and their album Beatitude are good too.

We ask if he's thinking about new ideas yet and he says he is, that just before he got out his Nokia and hummed an idea into the voice recorder.

Apparently he's been asked a lot about Air (but not by us!).

When I was working on the project I wasn't listening to music at all -- mostly I was watching movies and I was more influenced by a collection of images and these worked their way through my brain and into the music.

You said earlier that you were more influenced by images than music in your work. Do you think there are specific qualities of images that affect you -- shifting colors, cuts, patterns? Or do the images generally suggest a mood which suggests a sound or series of sounds?

It«s more like images triggering a mood inside. Then I start having a serious need for nailing the ideas down. Producing music is the most natural way for me.

We talk a little of Finland then -- the size of the population (five million in the country. About a million in greater Helsinki and about three hundred thousand in the city proper).

Then there's a mention of the shyness and the lack of talk amongst Finnish people (though this has changed over the last twenty years) and the irony of Nokia which has grown huge on talk the world over.

Marko mentions a moviemaker we should see.

It's by Aki Kaurismaki and is called A Man Without Past. It has a great warmth and natural melancholy.