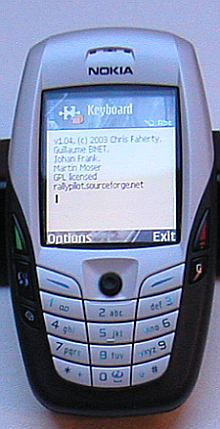 This is another Nokia with Symbian series 60 on board -- a smartphone. It has a screen a little bigger than the N-Gage QD and has infra-red as well as Bluetooth. It has a camera as well.

It hasn't quite got the quality feel of the QD but this is a cheaper phone, although it certainly isn't nasty. Speaking of the N-Gage, this has an SD card slot that you need to take the battery out to get at. Ring any bells? It doesn't matter in this phone at all, as most people won't be swapping their cards willy-nilly. It did make us wonder what would happen if we put an N-Gage game in though -- and the answer was nothing at all. Pity. That leads us to wonder what the nature of the lock is. After all, they both use the same operating system, but maybe there's some graphics acceleration in the N-Gage.

The software that was bundled with this phone included a nifty map-guide to NYC, and a list of interesting restaurants, things to see, etc for London, UK. There was also a trial version of an mp3 player which had such poor sound quality that we wondered whether it was a joke. We replaced that with the Helix DNA player (freeware). Also on board are the usual todo, notes, contacts apps, as well as a gallery app to take care of your photos. Most people will need to use the "fine" setting for the camera as the "normal" setting is really only good for things that will never get beyond a phone.

Luckily for us, the GPRS settings for the QD were able to be transferred across so we didn't have a repeat of the days of frustration we had the first time -- nothing to do with Nokia. This was the network company at work complete with its inadequately trained staff, inadequate at everything except buck-shoving that is.

No problem with getting or sending emails, and the included browser is adequate. We tried out the Opera version for this phone and it extends the experience significantly by giving you all sorts of extra options.

Python for Series 60 was recently released and we grabbed a copy of it. With it you can actually run a Python console on the phone, make your own scripts and run them as normal apps. Well, the packaging program to make an app runs on Windows only as far as I can see. I wish Nokia would see the light here. There are quite a few of us who live in a Microsoft-free world. If you're interested in an overview of programming for these devices, here is one at O'Reilly's written by the M Station editor a few months ago .... www.onlamp.com/pub/a/onlamp/2004/09/16/symbian_programming.html


Another thing we added really extends the use of this thing. It's an app called "keyboard" and what it does is use the infra-red port to connect with a pocketop miniature keyboard. The app was written for another model of Nokia so we were anxious to check it out and see if it worked. It does! Writing long emails now becomes do-able and the same for extended notes or whatever. We were a bit worried that the infra-red port is on the left side of the 6600 and the corresponding one on the pocketop is at the front and to the left but the beam proved to be wide enough that no mirrors or other trickery is needed. Anyway, amaze your friends by arriving at the library with just your phone and mini-keyboard to take notes. 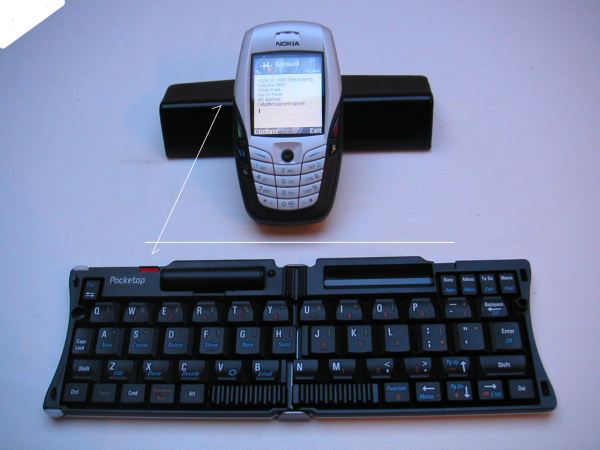 During the summer Nokia announced its own Bluetooth mini-keyboard for another model. We've tried to get information about it but had no success at all ... and it hasn't been in any shops we've seen either. It'll be interesting to see what it's like when it does finally surface.

All in all, this is a very cool phone. The killer app for us is the ability to use the mini-keyboard for the tasks the larger screen makes a practical reality.