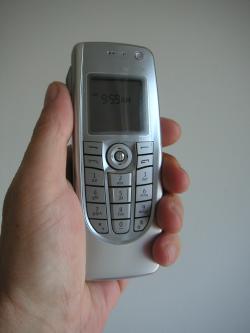 This is the one that opens up into an organiser whose genus was the much-loved Psion. The early ones were a bit bulky by the standards of today and this newish model has slimmed down quite a bit and also has shed the hardedged look for something more organic and rounded.

From the front it looks like a slightly largish phone by the standards of today, but not ridiculously so. There's a small screen to do the phone stuff set in what looks and feels like a brushed metal panel. The phone keypad has a nice quality feel to it as does the whole unit.

One really noticable thing is the boot time. It is really quick -- turn on, and you're asked for your code after maybe a second instead of the usuall waiting around. Other than that the phone part acts as a phone just as it should and just as most any other phone works. The drawback might be that the phone is a cutdown Series 40, in other words not a "smart" phone. So, for anything beyond simple contacts searchs and calling someone, you need to get into the organiser.

That aspect made one person comment that it wasn't a good phone for rough areas but that's more a lifestyle fault than a phone fault.

The interesting part is when you open the unit. Now, we have a full organiser, a wide screen, and a little qwerty keyboard. The organiser part springs to life as soon as the cover is opened, whether or not the phone is switched on, which is also a nice touch. 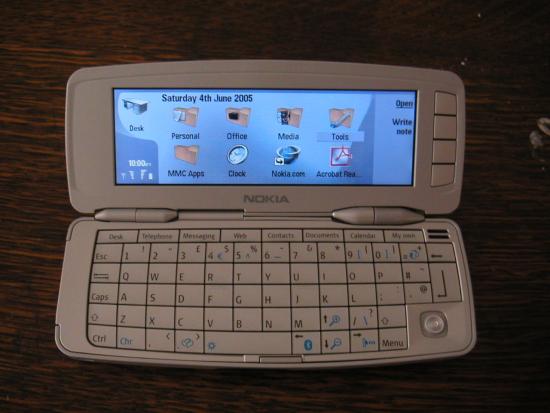 The organiser has the usual things -- diary, contacts, messaging. Messaging includes SMS and email and setting up the email part proved to be a breeze as long as you can remember you mailservers and username and password. There is also an "Office" section that has a word processor, spreadsheet, presentation software, calculator, and file manager. Apparently the file formats are compatible with MS Office but we didn't test this. A Media section will show images, record your voice, and play music. There's an acrobat reader and two timezone clock as well.

There's one game loaded on the machine and in keeping with the phone's executive ambitions, it's PGA Pro Tour Golf. It's not, as you'd expect, exciting exactly, but it is moderately diverting and quite well done. One thing is that the game plays silently until you sink a putt and then you suddenly get loud clapping and applause, which can have other commuters looking at you if you're on a crowded train or whatever. If you need to stop playing, you just close the lid. When you reopen, the game is exactly where you left it.

The wide screen makes reading more pleasurable than with the more usual narrow screens. Human eyes don't much like column widths of only a few words. Of course, you don't get all that many vertical lines but that seems less of a contention.

The little qwerty keyboard is much nicer than trying to write an email with a phone keypad but it isn't unalloyed joy. It really is quite small for full finger use and a little awkward to use as a thumbpad. Some people using the early version and the Psion didn't mind this at all so personal preference will be the main thing here. The driver we mentioned in connection with the Nokia 6600 doesn't work on this phone so you can't use the Pocketop keyboard as an add-on.

Connectivity is provided by USB cable and Infrared and Bluetooth. There's a cradle which you can charge the battery from as well as connect to your PC from or the cables can be connected directly to the phone. Battery life seems quite good although if you play a lot of golf during a day out, that will flatten it.

It's a nice unit with a quality look and feel and the wide screen of the organiser section makes reading and writing tasks easier than on a typical phone screen.