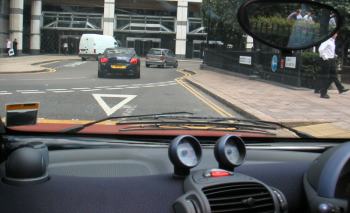 It's about time we looked at something that was a bit miserly in fuel use. The Smart series from Daimler Chrysler is certainly that with this car doing about 47mpg on the urban cycle and 70mpg out of town with the 61bhp engine or 43 and 63 with the 74bhp engine. The engine is a miniscule 698cc 3 cylinder with a turbocharger and the model bhp differences are mostly due to tweaking the turbocharger boost.

There's a coupe and a cabrio and also a more tuned version from Brabus. 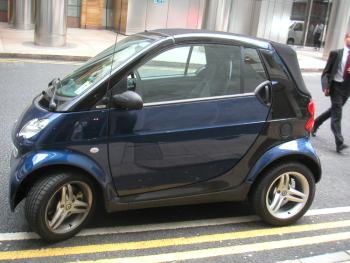 So, is it a joke? Possibly it would be in a wide-open prairie environment or even in a city of maniac oinkers. It is definitely suited to an urban environment and wouldn't be too horrible for country trips on non warp-speed highways.

Let's go for a spin around the block in one. First, its looks: they are either cute or weird, depending on your cultural disposition. Certainly the vehicle says "don't take me too seriously!"

Getting in is easy, and once you are the space seems bigger than you expect. Of course, the car ends just behind your shoulder and begins not too far from your toes. It's small! Luggage? Want to take your fave person and the gear needed for a week of formal parties? Sure. You'll just have to tow another Smart car to take the gear in. 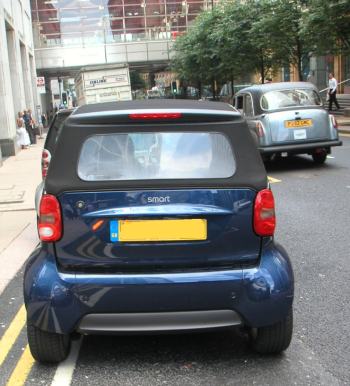 Just as the exterior won't be for everyone, so the interior will remind some of Fisher Price toyland, so -- cute or weird again. At least it's not standard issue gray boredom and it is heavily optionable as far as colour is concerned. In fact you can also have a series of different coloured body panels as well so, if you're having a Blue day you can swap the doors etc with a few minutes of effort.

The passenger cell looks like a monocoque racing roll-cage and apparently it does quite well in crash tests. Still, mass is mass and you wouldn't want to be in it if something big decided to come and visit.

Driving it is pretty much as you'd expect. It is not a racing car but does get about, with modicum fuss, in a way that might be described as endearingly zippy. The steering is light and you can have a F1 style steering wheel gear change flippers for those Kimi Raikonnen moments. The handling, with MacPherson struts at the front and a De Dion rear is also very good even if the short wheelbase gives a somewhat choppy ride on some surfaces. There is an ESP system to electronically help out in case of problems. 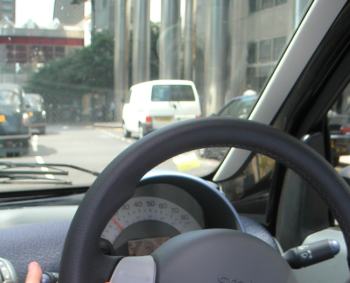 All in all it's good at what it's supposed to be good at. It's compact, easy to drive and park, and uses small amounts of fuel along the way.