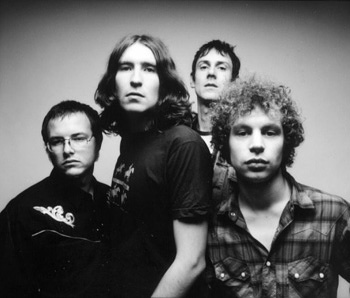 Eagle-eyed people will notice that these questions are exactly the same as the ones answered by Gravenhurst before Christmas. This was not a plan! It has worked quite well though even if the town is wrong in one of them.

The Mutts come from Brighton, UK and give a solid serve of guitar attack. They are signed to Fat Cat. www.themutts.com
fat-cat.co.uk

Mstation: 1. When you started, were you just about the fun of rocking out with guitars, or did you see some sort of gap you wanted to fill ... or both!?

Chris:There is no point unless there is going to fun involved but really we had to start creating noise that we wouldn't have heard otherwise. I know there has always been full-on passionate music out there, but from our town and backound, the most obvious thing to do was to do it ourselves. To be honest though, quit! Seriously quit! If you aren't having fun playing the guitars and writing the songs, quit. Otherwise there is no point

2. The guitar scene seems pretty healthy right now even if you wouldn't guess by looking at the charts. What do you think?

Chris:I don't think it's very healthy right now. A no mark can pick up a piece of wood with metal stretched across it create noise but I find it to be utterly unhealthy. It's a bit better than a few years ago but it's still a little poorly. Needs some medication.

3. If a band is as much a journey as a thing, where do you see yourselves going?

Chris: As far as our legs will carry us and as far as the van will go before the petrol runs out, to the end I guess

4. Brighton seems like a good place to be for a band, with its relaxed attitudes, venues, and plenty of students, not to mention proximity to London. Is that the way you see it?

5. As far as guitar sound goes, do you have some sort of ideal in mind? What sort of guitars and gear do you use?

Chris: Bryan plays the guitar so he'll probably have a different answer to this than me but I think they gotta have a warmth to them as well as a pure ear killin treble at the same time. But they can't be without shouting out a nasty vicious sound. "rough them up first then slap them in the face" noise, that's the best way I can describe it!!

Chris: There have been a lot of people who have done their thing without a moment's thought as to whether there is anyone else listening to them and I hold those people as close to my record player as those who have written songs that are on constant replay across uk radio and tv stations

7. Computer based studios have allowed bands to get a lot further along the track without having to get labels to fork out huge amounts of money for recording. Have these sorts of tools helped you at all? Do you use commercial studios at all?

Chris: When we first started out we had access to protools and other digital recording methods and this saved money, but then it took too long and also it doesn't suit our style of music. After trying this way and that, we now record using both analogue gear and digital, but most of it is done live in a room with everything mic'd up. nice and simple

8. What gigs have you got coming up in November and December? Any big plans for next year?

Chris: we just 2 shows left for this year. one in sheffield on 25th nov and one at brighton concorde II on 8th dec. then that will be it until near the end of Jan beginning of feb because we are recoreding the album in Jan which is the biggest plan for nnext year. once thats done we'll be touring our asses off across europe, the states, japan, anywhere that'll take us. see you then!!

Thanks a lot Chris.

You can get the latest gig dates from their website ... link at top of page.