The Subways are a power trio with a big guitar sound and a playful spirit. They hail from Essex, UK and comprise Billy, guitar and vocals, brother Josh on drums, and fiance Charlotte on bass. Here we have a chat with Billy who recently had some voice problems.
Subways official site
page at Warner's
Myspace page

First up, we have to ask about Billy's voice. Is it all fixed and better now? Will there be any technique changes to lower the strain?

Billy : Yeah it' all better now, thanks! The swellings in my throat have gone down now. I think 4 years of constant screaming on and off the stage has taken its toll. I suppose it gave me a chance to get my breath back and actually talk quietly for a while! But there's been no massive technique changes, just singing from the right place, which only makes me louder. Now it feels like I could scream and sing at the world and they'd all hear it.

You've taken the timeout as an opportunity to write some new songs. Like to tell us about them?

Billy : Sure. Well, we've all seen so much since we've been out into the world. Travelling over to America, Japan, most of Europe, Australia and we're lucky enough to have seen a lot of things. I mean, Josh and I were were always brought up quite liberal anyway, from the school of life, and with a "do what you feel is right" attitude and I suppose we've still really learnt a lot. Being in America really seemed to beef up our sound, and not in a conscientious or an overly contrived way, but just because of the places that we were playing, who we were playing to and how we felt when we got onstage. It's definitely more comprehensive, focused, but definitely a lot louder!

Talking of new stuff, is there a second album in the wind?

Billy : Yes! We're actually just playing our last 5 shows of the year as I speak to you, and we're getting ready to head into the studio and record those new tracks. I don't know how many we've got but we've definitely got more than enough to make a good rock record.

What gigs have you got coming up? There have been reports that your touring was cancelled before but there seem to have been quite a few gigs in the US. Were these short spots?

Billy : The shows in the UK and Europe weren't really cancelled, they were pushed back until a time where I could get onstage and properly give it my all for the hour or so that we need to headline. So we decided to head over to America for a support tour where you're usually on and off in 30 minutes and things seemed to get a hell of a lot better. But now we've come back and done them as best as we can, even breaking a few ribs in the process so it was well worth the wait!

Most reviewers mention the fun aspect of your show and the sheer zingy riff-laden rockability of it all. Considering most reviewers are male, Charlotte usually also gets a mention for energetic seductiveness. Having been at one of your shows, we second all of that but wonder if there's a serious aspect that people are missing. Do you think there is?

Billy : We do love to go crazy, but there probably is a element of seriousness that's not really on the surface and that's the fun of it. Subtext is what art is about, even if it is hidden amongst a haze of short-skirts, sweat drenched hair and rockabilly riffs. I think there are way too many bands out there who are just spouting this whole "band of the people" notion, or that they're the representatives of the working class or that they stand for this or that. It's not about interpretation anymore, it's about advertising what you are and that's a shame. We like to think that people can take away what they want from a show as long as they're inspired, be it from rockabilly riffs, a fascination for going mental or spreading the idea of love and harmony.

Billy's guitar sound is both thick and with a bit of sparkle at the top. Has he worked towards getting a particular sound? What means has he used?

Billy : I really just use the same stuff that I used when we first jammed in my front room playing punk covers and Nirvana songs. I use a Gibson SG guitar because my first ever rock concert was AC/DC at Wembley Arena, and I use Vox amps and really simple Boss pedals and it's all really easy to use. Simplicity is power. Everything else just comes, not from what I play, but they way I play it.

We always ask about influences. Nirvana has been mentioned in that line. Is there anyone else from then or now?

Billy : Influences are very important to us. Muse are a big inspiration, or at least Origin Of Symmetry was. When that came out everything changed for us. Rock could be clever AND powerful. A lot of pop music really inspires us. Some of the changes in the phrases and melodies of stuff like Madonna, Kylie, N*E*R*D, Outkast. Stuff like early R&B from the sixties like The Ronettes and Smokey Robinson & The Miracles started us off too.

The late, great, John Peel is supposed to have been the first DJ to play your stuff on the air. Has anyone come to take his place yet?

Billy : I have no idea to be honest with you. I think as long as someone starts playing more leftfield, heavier stuff instead of this turgid soft rock we're getting at the moment we'll be halfway there!

And for the future, is there a masterplan? What are your plans?

Billy : Well, this next record that we're getting ready to make is the only thing on our minds right now. Charlotte and I have just got a new place so it'll be nice to come back to after touring and set all that up - deck it out with all our CD's and DVD's and posters we've collected over the years. I think that our Masterplan is hidden so deep within the contours of our brains that even we have no idea what it is yet. Maybe you'll find it in the most unexpected of all places. Our rock show, maybe? Haha! 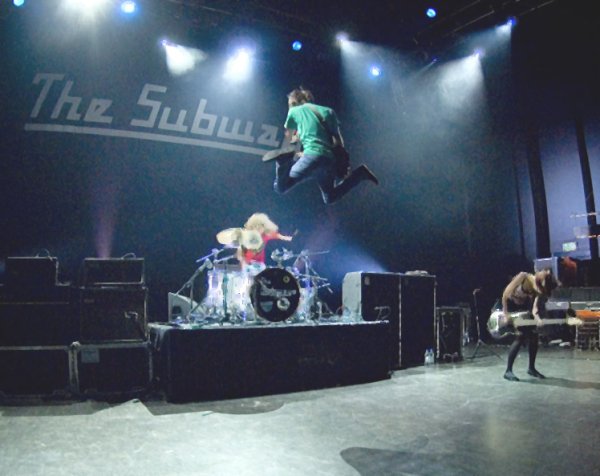